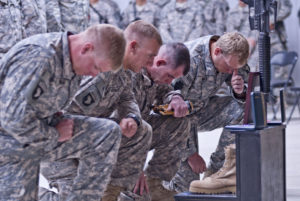 As I began thinking about and researching the sermon for today, I had a sneaking suspicion that I had preached on the same text three years ago when the lectionary cycle was on year B on Trinity Sunday.  The reason I can be so sure about it is that the Gospel text is about Nicodemus being born anew which didn’t speak to me three years ago and still is not speaking to me now.  So, if you were hoping for a sermon on that subject, you will just have to wait another three years!

But here we are three years later and this passage describing Isaiah’s calling to service and the extremely dramatic temple vision God takes on a new message for us in this day and time.  Listen anew to this vision and call to service from the Book of Isaiah 6:1-8.

“Holy, holy, holy is the Lord of hosts;
the whole earth is full of his glory.”

4 The pivots[a] on the thresholds shook at the voices of those who called, and the house filled with smoke. 5 And I said: “Woe is me! I am lost, for I am a man of unclean lips, and I live among a people of unclean lips; yet my eyes have seen the King, the Lord of hosts!”

6 Then one of the seraphs flew to me, holding a live coal that had been taken from the altar with a pair of tongs. 7 The seraph[b] touched my mouth with it and said: “Now that this has touched your lips, your guilt has departed and your sin is blotted out.” 8 Then I heard the voice of the Lord saying, “Whom shall I send, and who will go for us?” And I said, “Here am I; send me!” The Word of the Lord. Thanks be to God.

It is Memorial Day Sunday.  It is the Sunday we honor our Veterans and give thanks for those who have made the ultimate sacrifice for our freedoms and liberties.  Although up North, it also represents the beginning of outdoor season, patios are set up, grilling is a must, and white pants and shoes are allowed to once again come out of the wardrobes and worn until Labor Day, and well, …I guess down here it is the beginning of the rain,….the holiday is really one of thankfulness and appreciation for those whose work has been in military and civil service for our country.

I gave the invocation at the City of Coral Gables Council meeting this past week.  They invite a clergy person from Coral Gables to give an invocation to begin each of their meetings so it was not my first time doing this.  In my prayer/meditation I talked about the call to service and the gratitude we should have to those who have served in civic duty and in the armed forces to protect our liberties.  After thinking about it, I realized how perfect the passage from Isaiah is as it is a call to serve and this weekend we have the opportunity to hold up those who have answered calls to service.

Listen now to the voices of those who have or are now serving our country as civil servants and in our armed forces.

American Soldier Pete Hegseth has said, “Memorial Day isn’t just about honoring Veterans; it’s honoring those who lost their lives.  Veterans had the fortune of coming home.  For us, that is a reminder of when we come home we still have a responsibility to serve.  It’s a continuation of service that honors our country and those who fell defending it.”

Senator John McCain says, “Every day, people serve their neighbors and our nation in many different ways, from helping a child learn, or by easing the loneliness of those without a family, or by defending our freedom overseas.  It is in this spirit of dedication to others and to our country that I believe service should be deeply encouraged.”

Pope Francis has said, “Every man, every woman who has to take up service of government must ask themselves two questions: ‘Do I love my people in order to serve them better?  Am I humble and do I listen to everybody, to diverse opinions in order to choose the best path?’  If you don’t ask those questions, your governance will not be good.”

And Isaiah is wrestling with God calling him into service.  In his vision he is summoned to the throne of God and he cowers and feels unworthy of the task.  Perhaps it is the vision of God that intimidates him…. I mean that vision would intimidate me too.  God on a throne, who was SO HUGE and LOFTY that God’ hem of his robe filled the whole temple.  An over whelming sight, to say the least!   ……God calls and he feels unworthy to do the task.  Much like the Great and Powerful Wizard of Oz, scene with the smoke and fire and the cowardly lion jumping out the window in fear and trembling, this vision of all power and might was downright frightening!  And, Isaiah, understandably does not feel up for whatever task is going to be set before him.  He is grieved at the thought.  And he screams, ‘Oh Woe is Me!’

And a seraph, some sort of an angelic being, flew at Isaiah and put a coal in his mouth and somehow that cleansed him and gave him the courage, the power, the ability or audacity to be a spokesperson for God.  He answered the call to service.

What has happened here?  God calls Isaiah into service and he does not feel that he has the gifts for the task.  He looks at the problems of his day… and feels he is not the right person for the work that must be done.  Just as it is today, Isaiah’s world was in turmoil.  There had been a near-but-not-total destruction of Judah by the Assyrians and the leadership of the people was not stable.  Just like today, people were needed to speak to the Jewish principals and ethics in a changing world where assimilation into other ways of thinking would be so easy.  I’m sure Isaiah prayed to God, ‘Surely there is someone more suited for this important task!’

And we too are overwhelmed.  Immigration continues to be a problem that is not easy to solve and our undocumented neighbors in our city live in fear of being uprooted, detained, or forced to leave the country they call home.  Surely, someone is more qualified than us to work on that issue.  Our children feel insecure in their schools and we look forward to the end of the school year so that we can get a reprieve from the monthly school shooting of the innocents.  Gun Control is a huge and complex issue and fighting for it is like David going up against the Goliath of the NRA.  Surely there is a qualified person to work on that issue.  And here we are living in a part of the world that will be underwater in years to come if we don’t stop the warming of our planet.  This overwhelms us so much we choose not to think or talk about it.  Better to let those who are more knowledgeable about such things take up that task.  We think about all that needs to be done to create God’s realm on earth and scream into our pillows at night, ‘Woe is me!’ I am not worthy or qualified for the work that needs to be done.

President George W. Bush is quoted as saying, ‘Use power to help people.  For we are given power not to advance our own purpose nor to make a great show in the world, nor a name.  There is but one use of power and it is to serve people.’

Physician, theologian, and philosopher Albert Schweitzer said, ‘The purpose of human life is to serve, and to show compassion and the will to help others.’

God calls God’s people into service.  In being a part of this community called Riviera, we believe that each of us has a gift, a skill, a spiritual ability to serve.  Riviera has a long and rich history of involvement and service in civic issues.  At our very core, the essence and D.N.A. of this church, is a calling to put our faith into action.  The coal was put into each person’s mouth and this community is called into service.  And we will continue to answer, here we are; send us!  And I don’t know what your particular spiritual gift and calling is.  Some are called to put their faith in to practice by writing letters to the editor, or by writing to our elected officials, and by praying to God for God’s good realm to come on earth.  Others are called into a service of action and demonstration.  The crowds that filled the mall in DC, the streets of South Beach and Parkland, and in cities all across the United States after the mass shooting at Marjorie Stoneham Douglas High School was a statement of what the youth of our country can accomplish when called to serve.  They are our coals and the example of what a call to service can be.

And things will not slow down for us this summer.  In the next week the newsletter will come out with ways in which you can serve and we can do God’s will in community. Join us for fellowship and caring for God’s creation as we enjoy breakfast and help clean up the beach on which we will eat and swim.  God is calling us to wrestle with the issues of our day just as God called Isaiah and we will have a book study on a novel whose underlying themes are the isms of our day.  We will have a movie and discussion night on the issue of gun control inviting some of the youth now active in the movement to join us.  Through study, worship, and action we will live out our calling by God to be a servant people.

President Barack Obama said, “ We are reminded that in the fleeting time we have on this earth, what matters is not wealth or status or power, or fame, but rather how well we have loved and what small part we have played in making the lives of others better.’

Theologian and mystic Thomas Merton wrote, ‘A life is either all spiritual or not spiritual at all.   No one can serve two masters.  Your life is shaped by the end for which you live.  You are made in the image of what you desire.

John F. Kennedy is quoted, ‘We are not here to curse the doctrine but to light the candle that can guide us thru that darkness to a safe and sane future.’

And finally, another quote by Albert Schweitzer, who when I was first ordained you had to quote at least once in a sermon, ‘I don’t know what your destiny will be, but one thing I know; the only ones among you who will be truly happy are those who will have sought and found how to serve.