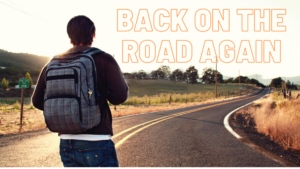 In one of the churches I previously served, we came up with an evangelism plan.  At the Annual Meeting which takes place in most Presbyterian Churches in January where the budget is discussed, we would give a St. Paul the Evangelist Award to the member who invited and brought to church the most guests during the past year. The year I received it, I knew the numbers were skewed and I had to relinquish it and give it up to the strong runner up because I had a large family reunion that year and made my whole extended family attend church as a part of the reunion weekend.

But the title of the award was accurate. St. Paul the Evangelist….If there is one person who we can attribute to moving Christianity from a small sect, an offshoot of Judaism in a church in Jerusalem, to a major worldwide religion, it is Paul, whose missionary journeys are accounted in the Book of Acts.  And today we will talk a little about the chapters of the book where Paul continues his journeys this time throughout much of the cities along the Mediterranean Sea east of Italy.  Not only does Paul revisit the communities of Christians he formed in his first journey but he travels as far north as Philippi and as far west as Athens and Corinth.

And as he did, he learned how to adapt the culture of the people to whom he preached to his sermons.  He had to learn that instead of negating their religion, culture, and background, he needed to find ways to convert the people to Christianity while not offending…. or by not offending too much…

Probably the best example of this is in the 17th chapter of Acts while he is in Athens. It says he was deeply distressed over the many idols. He wisely uses the idols to the many gods to preach about the one God he worshiped and in which he believed.

Listen now for the message Paul preached in Acts 17: 22-33. 22 Then Paul stood in front of the Areopagus and said, “Athenians, I see how extremely religious you are in every way. 23 For as I went through the city and looked carefully at the objects of your worship, I found among them an altar with the inscription, ‘To an unknown god.’ What therefore you worship as unknown, this I proclaim to you. 24 The God who made the world and everything in it, he who is Lord of heaven and earth, does not live in shrines made by human hands, 25 nor is he served by human hands, as though he needed anything, since he himself gives to all mortals life and breath and all things. 26 From one ancestor[a] he made all nations to inhabit the whole earth, and he allotted the times of their existence and the boundaries of the places where they would live, 27 so that they would search for God[b] and perhaps grope for him and find him—though indeed he is not far from each one of us. 28 For ‘In him we live and move and have our being’; as even some of your own poets have said, ‘For we too are his offspring.’ 29 Since we are God’s offspring, we ought not to think that the deity is like gold, or silver, or stone, an image formed by the art and imagination of mortals. 30 While God has overlooked the times of human ignorance, now he commands all people everywhere to repent, 31 because he has fixed a day on which he will have the world judged in righteousness by a man whom he has appointed, and of this he has given assurance to all by raising him from the dead.” 32 When they heard of the resurrection of the dead, some scoffed; but others said, “We will hear you again about this.” 33 At that point Paul left them. 34 But some of them joined him and became believers, including Dionysius the Areopagite and a woman named Damaris, and others with them.

Paul knew he had good news to share. He looked at the Athenians and their sacrifices to small gods and knew that they worshipped false idols.  Just as we can look at our friends and people around us and see their unhappiness in making the wrong things important, in having false gods, in having priorities which will only lead to misery and loss; Paul looked at these people and wanted them to know the good news he came to share. He pointed that his God was beyond our total grasp, was beyond our control, was around before time and created all that we know. Paul’s God (our God) was the one God from whom all the rest of the world came. Paul was brilliant in his approach.  You do not make converts by telling someone that they are ignorant but by showing them a better way.

And I think about the church today and how some people think it is a dying institution. Mainline Christianity diminishes in membership each year. And why?  We here at Riviera know that we might not have gotten through these past few months without the church. It has been a life line for many of us as we attempt to make sense of and live through this pandemic. And we have continued to lived out the ethic of our Lord in the missions of our church in this time of an economic downturn when so many people are out of work or underemployed. We can offer food, we can offer school supplies, and we can offer hope and love to a hurting world. Just like Paul, our message is bigger than what others are sinking into. We can point to a God who of total Love.  And God who knows no boundaries in Acceptance.  And a God who never abandons but who sent God’s own son so that we might know God as intimately as a child knows the love of a parent.

Somehow… we need to get the word out, as Paul did, that there is good news in our faith.