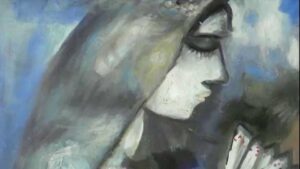 Then Jesus[a] told them a parable about their need to pray always and not to lose heart. 2 He said, “In a certain city there was a judge who neither feared God nor had respect for people. 3 In that city there was a widow who kept coming to him and saying, ‘Grant me justice against my opponent.’ 4 For a while he refused; but later he said to himself, ‘Though I have no fear of God and no respect for anyone, 5 yet because this widow keeps bothering me, I will grant her justice, so that she may not wear me out by continually coming.’”[b] 6 And the Lord said, “Listen to what the unjust judge says. 7 And will not God grant justice to his chosen ones who cry to him day and night? Will he delay long in helping them? 8 I tell you, he will quickly grant justice to them. And yet, when the Son of Man comes, will he find faith on earth?”  The Word of the Lord. Thanks be to God.

As I prepared to write my sermon this week, one commentary said that it was a hard Parable to hear because the characters are not particularly likable.  Funny, when I read it, I liked the characters as they were, so, well, they were honest and believable.  Also, there is no hidden agenda in this parable.  Jesus tells us right away what the parable is about and that the characters are a  judge who is not a religious person and that he had no respect for others and a widow who at best could be described as tenacious in her quest to get justice because she was wronged in some way.  And the characters are who they are.  They don’t have a religious epiphany or a change for the better during the parable…. They just are who they are….

Jesus tells us this is a parable about the need to pray and to not lose heart but to continue praying when your prayers are not answered right away.  He introduces us to the Judge and the Widow, who if I made a film of this story, I would cast Ed Asner as the crotchety old judge and Shirley MacLaine as the out of control widow on a mission for personal justice…. We are not sure how this widow was wronged, but we do know that she was relentless, tenacious, persistent, and perhaps pugnacious in her asking the judge for justice.  And, her arguments for justice seem to fall on deaf ears with the judge.  He isn’t into ‘righting’ all the wrongs of the world.  But he finally grants her her justice, just to get rid of this squeaky wheel who probably had been coming by his office for months every morning after she dressed, got a cup of coffee and had breakfast. It was her first task each day.  It was her mission. The actual word in Greek used for this woman’s badgering of the judge translates to her having punched him in the eye, so, there must have been a bit of strength or even violence in her wearing him down.

And we all know people like this widow.  They are the ones who refuse to give up on righting a wrong, of fighting for the greater good NO MATTER HOW MANY TIMES INJUSTICE SEEMS TO WIN.  These are the warriors who refuse to give up.  For most of us, their persistance is not logical.  It is like going the wrong way up an escalator, but their tenacity also humbles all of us who quit after giving it ‘the ole’ college try!’  We have all sorts of good intensions but we whine….’I wrote my representatives about a woman’s right to choose, and a lot of good it did!  I went to a rally for gun control and the NRA still controls the government.  I voted and my candidate did not win.  I work to get the word out about global warming but no-one wants to listen.’

But this is a story about tenacity winning.  The widow got the justice for which she was fighting.  She fought and fought until she received the justice she was seeking.  This is a story about people who make bringing justice to earth their life mission.  This is about people like Jim Wallis, who founded the Sojourners Community in Washington DC whose ministry is to be a prophetic voice of the voiceless, it is about the young people from Marjorie Stoneman Douglas High School fighting for gun control, and Greta Thunberg who has become the prophetic voice of the climate crisis.

And Jesus uses this woman as an example to us.  We should continue to fight and to pray because our prayers and persistance pays off.  In fact Jesus says, ‘will not God grant justice to God’s chosen ones who cry day and night?’  This parable is not about waiting for God to bring you justice, but it is about working for justice and screaming about it until you are blue in the face!  That widow would still be going to the judge every day for justice and we must do the same.  Praying, it seems, can be much more than being contemplative (although nothing is bad about contemplative prayer).  Some prayer involves action.  In fact some prayer involves repeated action day after day.

Another commentary talked about how at times when we pray, it feels as though God is the unjust judge and does not hear or answer our prayer.  Often our prayers for healing, for justice, for peace, for security, and for peace go unanswered.  And we know that is true. God does not always answer our prayers just the way we want.   But we also know the power of prayer is that we are not alone, that our God is with us and cries with us as we pray and through prayer we, not God, are transformed.

The mission committee meets after church today.  Anyone is welcome to attend.  We will be planning the mission focuses for 2020 and will talk about such topics as how to involve the whole church in issues of hunger and homelessness and how best to help the children and teachers at Frances Tucker Elementary School.  The committee will discuss what it means that we have declared ourselves a sanctuary church for immigrants, and they will talk about ways we can involve and make changes in those larger than life issues of earth care and global warming.  These are huge issues for a little church.  But, if we are persistent like the widow…. if we keep on chipping away at the issues of justice that are in our society today, we can make a difference. Jesus promises us that if we pray and work for justice like the tenacity of that widow, we can create change.  Christ calls us to keep on working to answer the prayers of our crying world.  And together, here at Riviera Presbyterian Church, we will do just that. Amen.