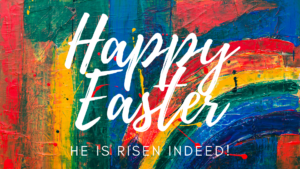 So, Mary Magdalene goes to the tomb of Jesus and finds that things are not right.  She does not enter, but sees that things have been moved… the rock that covers the entrance is moved… It looks suspicious!!!….there has definably been a change since she last saw it.  She runs to where the apostles (who have at this point held themselves up in that room with the double locks on the doors) and she gets Peter and another disciple whose name we do not know to come with her to see what is wrong.

The men get there, go into the cave, and see that the body is gone.  They see that the linen grave-clothes have been folded and put to a side and the clothes covering the face of the body have been rolled up and set aside separately.  The scripture passage says the men left to go back and tell the others and that the unnamed man believed.  We are not told what it is he believed, but they run back to tell what they found to the other disciples who are in that locked room.

But Mary stays.  She goes into the cave and weeps.  The past several days have done her in.  The man she loved and believed was her Messiah was crucified, dead, and buried.  She weeps tears of grief that only someone who has lost a person very dear to them can understand.  And while she cries, she sees two messengers from God.  These are seated where Jesus’ body was supposed to be.  These messengers from God are not a typical occurrence and are only used by God to explain something very hard to understand to us mere mortals.  (Think of how they reassured Joseph or when the Shepherds in the field were told of the birth of Jesus.)  She asks them where Jesus’ body has been taken.  Resurrection is out of her comprehension and experience.  Then another figure appears and she thinks he must be a gardener, and she asks him the same question.  And he says her name and she believes and she knows…..She knows that even though her Rabbouni Jesus had been crucified, dead, and buried, he rose again!  Easter Came! Christ has risen, Christ has risen indeed!

We read this story every year.  And every year, we resonate with different figures in the story which is why it stays so real and it can be so new to us each time it is read.  This year, many of us might feel that we are in that upper room. The followers of Jesus are there in the safety of a locked room, working through the emotions of the past few days.  We know that when we are grieving, it is important to be with people we love and who are sharing the same loss.  And the apostles are frightened.  If they leave, they might be harmed.  And we feel that way about our homes now.  If we leave, we might be harmed.  It is safer to stay indoors.  Also, they have emotions they need to work through.  I am sure there was anger.  Who is to blame for what happened.  And we might have those feelings we need to get over as well.  They do nothing to solve the problem at hand.  And Jesus’ followers need to regroup, rethink what is God’s message of love and compassion in a time such as this.  And dear friends, we too are looking to where God is in this time of our history.

And with all these same emotions, Mary ventures out to tend to Jesus’ body.  And something unexplainable has happened and Mary does not know what at first.  She thinks that someone has tampered with Jesus’ body.  Her grief is huge as she thinks that yet another uncontrollable and awful thing has happened.  But Jesus comes, and by speaking her name, causes her to understand the incomprehensible. That God’s power is greater than death.  That God does not abandon. That God loves us in a way and offers resurrection to us in the areas of our lives we thought were lost.

And we are Christ’s people.  And as Christ’s body, it is our job to share that same love and to bring hope and resurrection to people when they are lost and feeling hopeless.  Ours is the story of the empty cross.  That with God all things are possible.  We need to share that love, that compassion, and that hope with others, perhaps now, more than others.

The internet has been filled with stories of people who are stepping up to help others. Checking on neighbors and friends, leaving food at the homes of the elderly or people with the virus.  And making face masks to give to hospitals and to others who need them.

I saved a quote from a rabbi who made a comment during another natural disaster.  The Rabbi was asked how one could explain such a tragic act of God.

The rabbi answered that the disaster was an act of nature.  The act of God occurred when people stepped up to help each other.

Riviera family.  Let’s be the message of the resurrection to others. AS we stay in our homes and distance ourselves from others, we do not need to stay in the tomb in sadness and depression. Easter has come.  That tomb is empty.  God calls us to find new ways to love and care for others and we will.  After all, God loves and love always wins.  Amen.

Lent @ Riviera: A Season of Confession