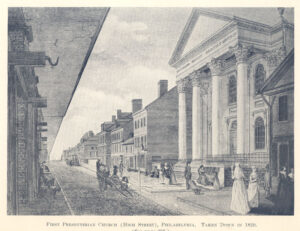 “Per Capita is crucial to the overall health of the PC(USA),
because it binds presbyteries, synods,
and congregations together in one church.”
– J. Herbert Nelson, II, Stated Clerk of the General Assembly of the PC(USA)

The origin story of Per Capita takes us back to the earliest Presbyterian General Assembly meetings in the U.S.

In those days, the Assembly met annually, always in Philadelphia. As the church expanded into far-off places like Ohio, Kentucky and Missouri, attendance at the Assembly became prohibitively expensive to frontier commissioners. So in 1806, the Assembly began development of a “Commissioner Travel Expense Fund,” which over the years came to be known as Per Capita.

Today nearly all the expense of a General Assembly is paid by Per Capita with nearly half of that paying for travel, housing and feeding of the 800-900 commissioners and advisory delegates who attend. What is an Assembly? It is the one place where the whole church gathers. Commissioners and youth from every presbytery are in attendance. Representative students from the seminaries, ecumenical partners from all over the world, and mission co-workers make up a significant number of advisory delegates. Thousands more gather as observers or supporters. They are there first of all to worship, and also to do business. An idea which may have begun at a local church’s session meeting passes through presbyteries to become Assembly business as overtures.

There are Moderators to elect and mission initiatives to form at Assemblies. It is also the place where the larger church can adopt statements which speak to the Church and sometimes to those outside the Church about issues of theology, justice and peacemaking. At an Assembly everyone’s voice is valued, every part of the Church is brought into the light of the Spirit and together the people seek to discern the will of Christ.

If you would like to help us defray the cost we welcome your donation.

You may donate online https://www.rivierachurch.org/give/ under Per Capita.

All Presbyterians are called to take part in the whole church’s ecclesiastical and administrative work through per capita giving. The annual rate is a per-member apportionment that is assessed biennially by the General Assembly. (Book of Order, G-3.0106)

Rev. Martha ShiverickSupporting the Presbyterian Church via its unique ‘Per Capita’ system02.08.2021