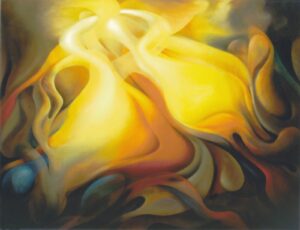 If you look at the preaching records over the past five Transfiguration Sundays, you will find that it is usually the Sunday that we have had a guest preacher.  Alex McNeil from More Light Presbyterians preached one year…. and Frank Yamada the President of McCormick Seminary preached another.  Danny Preached one year before he was ordained and we invited Daris Bultena, our General Presbyter last year.  There is a reason for this.  There are some weird stories in the Bible, and this one, to me, is on the top five.  And it is a major day on our church calendar.  Transfiguration Sunday is a Church holiday and it always falls the Sunday before Ash Wednesday and the beginning of Lent.

And, to be frank…. it is a wild story which baffles every commentary I have ever read on it.  So the question is: What does the wild story mean?  Why is it included in the synoptic Gospels?

The Transfiguration of Jesus is told in the Gospels of Mathew, Mark and Luke, and with just very slight variations, it is pretty much the same story that is told.  Listen for the story told in Luke 9:28-36.

28 Now about eight days after these sayings Jesus[a] took with him Peter and John and James, and went up on the mountain to pray. 29 And while he was praying, the appearance of his face changed, and his clothes became dazzling white. 30 Suddenly they saw two men, Moses and Elijah, talking to him. 31 They appeared in glory and were speaking of his departure, which he was about to accomplish at Jerusalem. 32 Now Peter and his companions were weighed down with sleep; but since they had stayed awake,[b] they saw his glory and the two men who stood with him. 33 Just as they were leaving him, Peter said to Jesus, “Master, it is good for us to be here; let us make three dwellings,[c] one for you, one for Moses, and one for Elijah”—not knowing what he said. 34 While he was saying this, a cloud came and overshadowed them; and they were terrified as they entered the cloud. 35 Then from the cloud came a voice that said, “This is my Son, my Chosen;[d] listen to him!” 36 When the voice had spoken, Jesus was found alone. And they kept silent

Prior to this passage in the Gospel of Luke, Jesus has asked his disciples who people were saying that he was.  And after their responses to him that people were talking about him being Elijah or another prophet or someone like John the Baptist, Jesus asks who they say he is.  And Peter answers that he is the Messiah.

Following this faith statement, Jesus takes Peter, James, and John on a private hike up a mountain to pray.  And while they were resting on the top of the mountain, the disciples saw this vision of Jesus in dazzling white.

A vision?  Perhaps a hallucination?  Or a feverish mirage.

What in the world can this story mean?

Jesus takes three of his closest and most trusted disciples and asks them to go on a hike up a mountain with him.  They say it is to pray, but that would mean that Jesus had no idea what was going to happen up there, and I believe he was in total control.  Perhaps that is only what Jesus told them because if he said they would witness a great vision, more disciples would ask to come or perhaps the three that were invited might be too frightened to go with him.

So they probably had wonderful discussions along the way but all we hear about was when they get to the top of the mountain and the three disciples are resting, but they are not asleep.  Really…. I mean would you remember a conversation you had before a major event like this?  However, the author wants us to know this vision they see is reality and not a dream that they saw.  And what did they see.  White…. A Really, Really White Cloud?….. And in the white was Moses and Elijah with Jesus.  It was commonly believed that Moses and Elijah would return with the Messiah and perhaps that accounts for the vision.  And the white…. well, perhaps that was the same white that was all over Moses face after he had been talking with God.

And our disciples are frightened.  It actually says they were terrified.  But Peter, always the pleaser, comes up with what he feels is an appropriate response for the experience.  He is going to build dwellings for Jesus and his two visitors.  The mountain could become a destination for all followers.  A shrine of sorts and possibly a way to get some control over these strange apparitions.  But then a voice came from the cloud… God’s voice…and its really close…and although I really want to know, we are not told if it was a sweet loving voice or a bellowing forceful one, but the voice says that this is my Son, my Chosen, and that they are to listen to him.  And then it says they just went home and didn’t speak a word of any of this to anyone.  Really?

As I said earlier, right before this story, Peter had already confessed that the disciples believed him to be the Messiah.  So, why did the vision have to happen?  They were already on board with their faith.  One commentary said the Transfiguration occurred because it is one thing to know something intellectually, even to be able to state it as a fact, but to truly own a belief, you have to experience it in a different way.  We can talk intellectually about love, hate, fear, grief, and other things in life, but until we experience them they are not real.  The disciples, having that vision on the mountaintop made their belief in Jesus as the Messiah, the Son of God very real to them.

People are eager to share their knowledge with others, but to really know something is to know it more than as an intellectual exercise.  It is to live, act, and practice it.  We have a lot of words for Jesus, Savior, Redeemer, Lamb of God, Good Shepherd, Son of God and Son of Man.  But we have to experience Jesus in our lives to really know him.  How can we understand any of what Jesus said and is and was unless we somehow reach an emotional relationship with him in our lives?

And that is what I think the Transfiguration of Jesus is all about.  The Disciples knew the words, but they had to experience the fullness of Jesus to truly know him.

This week, as we experienced a sad moment in the Christian Church when the Methodists voted once again against full inclusion of all of God’s children.  We felt emotionally about it.  We felt that it was something Jesus would indeed cry about and against which he would speak out.  It is sad, because in making their choices, the hierarchy of the Methodist Church chose not to experience the total and true love of God.  They put limits of what is limitless.  They chose not to know in full what is before them.  God’s love is unconditional.  We here know that.  We read the Bible and know that Jesus message was to look beyond the people who are like us and invite the people who others have abandoned, found unworthy, and unlovable.  Because at the root of our experience of God and God-in-Jesus is love which knows no boundaries.

And, the thing always scares me is that when people choose to limit love, hatred can grow.  Just one day after the vote was taken at the Methodist national conference, I received a hate phone call.  We had not had one of those in months and I thought they might have run their course but I guess it got a little refueled by the Methodist vote.  The caller stated that we were evil and spewed hateful things about our church.  How sad for the man who was filled with such prejudice.  I can say with confidence that we know love always wins.  God, who is more multidimensional than a rainbow, teaches us and allows us to experience extreme love and acceptance. We don’t just intellectually know of God’s unconditional love, we are the recipients of it.

One Methodist minister who is serving a church north of us has a gay son and wrote a mutual friend wondering if she should leave the denomination to be truthful to her son.  I wrote back and told her that plenty of us felt like she does until our church voted for total inclusion.  In anger and frustration, I tried twice to turn my ordination certificate back to the Stated Clerk of my old Presbytery but, thank God, the Clerk refused to accept it.  She told me that it was my responsibility to change what was wrong.  It was my ministry, and it is our ministry to show the world even now what God’s love is.   People need to know that God’s love is always broader, deeper, and more beautiful than we can imagine and initially see.  Just like a geode, digging deeper seeing the transfiguration of what we thought we already knew, makes all the difference.   Digging deeper, we understand the true beauty of God’s love.  Amen.

Lent @ Riviera: A Season of Confession